My pallet tends to grow a bit, here is the state of things after I'm mid-way through the enamelling. It's best not to expand too much, especially for a graphical piece. Although, having said that, the Amazon frog is partially graphical and partially a painting so all rules are out!

Here's after the first application of enamel, 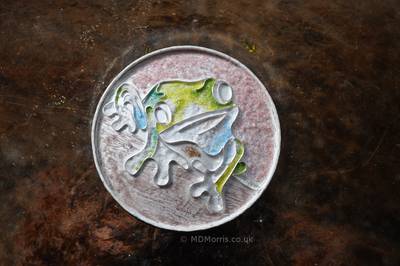 the enamel is applied wet with a quill or brush. I'm keeping everything light and using transparent enamel to start with. This is so, if any enamel runs into the next cloisonné, it will have less impact than if it was a darker colour.

I'm never 100% sure what colours to use at the start, they tend to evolve a bit. Sometimes, though, it's better to be sure at the start; for example putting an opaque enamel on top of a transparent can result in the transparent bubbling through from behind an ruining the result!

I continue like this, here's after the second firing:

Here's after the third firing:

Now, as you can see, I've gone and got the red background very dark and almost completely lost that lovely guilloché. I was quite annoyed with myself :~( How could this happen? Well two things:

1) I should have mixed the transparent red with some flux to really thin it down,

2) I'd put on some fine-grain transparent red and forgot to wash it first - the result is a mucky, semi-transparent, red.

The latter is, perhaps, a mix with laziness too. Maybe it's a good thing I didn't get away with it. This is a test piece after all and getting a kick back here is much better than on a production commission.

I try adding some flux to the piece to see if this helps to thin out the red and, also, continue with the rest of the piece. Here it is after the fourth firing of enamel: 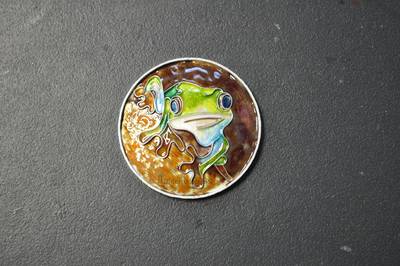 Well, looking at the piece now, I really like the frog and, in fact, the darker background helps to emphasize it....hmmm! Maybe it's not so bad after all. So I use some opaque red and play with the shading so the left-hand background red is more opalescent (semi-transparent): 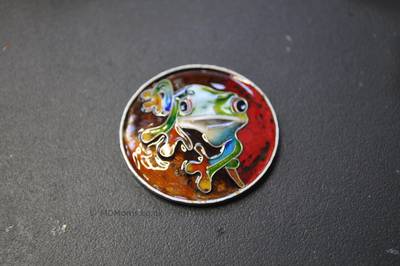 I've also put some opaque enamel on the tree branch just below the frog, to draw the eye to the main subject, but kept the tree branch in the foreground transparent to give some play of light. I think the colour scheme is looking pretty good after all.

Looking at the depth of enamel in each cloisonné there's still a lot of enamel depth to build up:

The surface of the enamel is certainly not consistent even within an enclosed wire section (cloisonné). So the enamel needs building up, it's a chance to enhance the colours but, also, an opportunity to mess it up too! Care, care, care, but not at the expense of artistic flare, flare, flare!

Here's the piece ready to go in the kiln with the extra enamel. It's mostly flux at the bottom, since I don't want any more colour and opaque red in the background. I'm being really careful with the frog now: 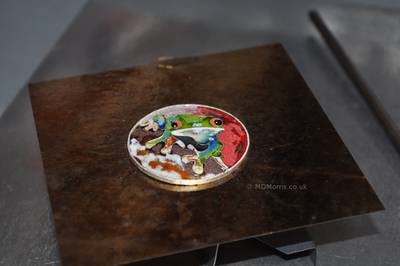 Here's what it looks like just out of the kiln: 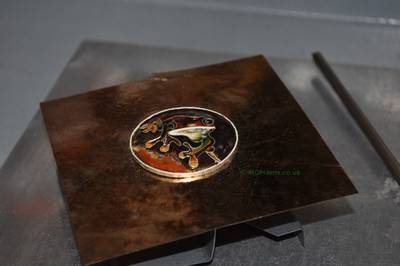 See how the colours are all different when the piece is hot - sometimes this can spark off some good ideas!

Nearly there, just need to raise the surface enamel in some places so a bit more enamel, 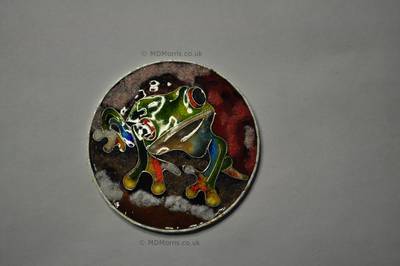 After firing it and cooling down it's looking like this: 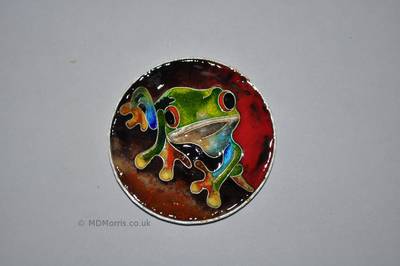 It's ready to grind back the enamel to a nice curve and bring back the silver wires.

I grind the enamel surface back under running water 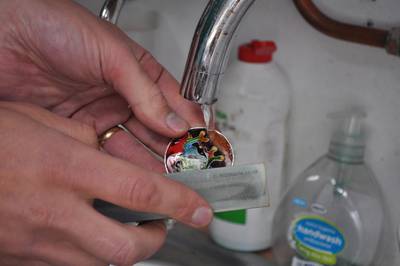 I'm careful and go slowly. I try to only grind those areas where the silver wire has not yet been revealed. After grinding I scrub with a brush and dry off.

If I may say so, it's looking rather nice! There's still a bit more enamelling required, though, to build up the sections.

I went through the process of adding more enamel and grinding back a few more times; 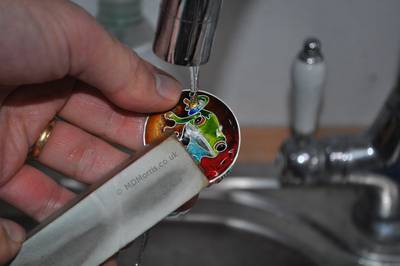 until all the enamel was at a consistent height and all the silver wires were revealed. Then the piece was polished with wet (just sloppy) fine pumice powder on a slow felt wheel, followed by jeweller's rouge on a fast wheel. then it looked like this: 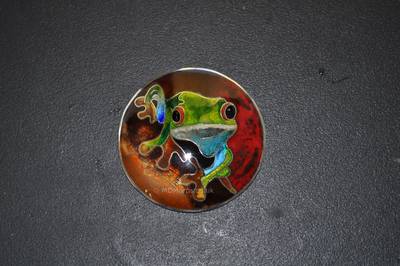 After using rouge I need to give the piece a clean. I also need to give myself a clean too, that stuff gets everywhere, it's unbelievable! Fortunately, as far as I'm aware, it's just iron oxide in a tallow block so it shouldn't be toxic! I still wear a face mask filter and have a ventilator going, even so. 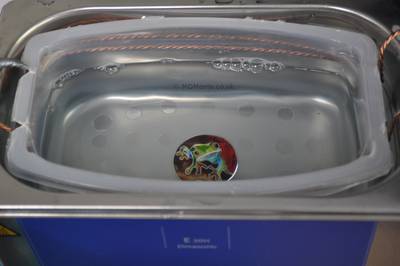 The sonic bath has a solution of water, ammonia and liquid soap. 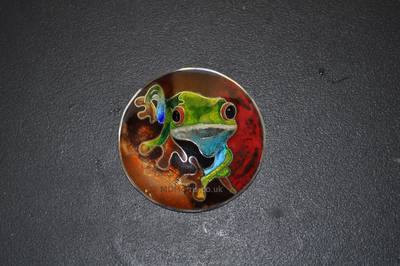