Yes!! Time to get enamelling!

In order to successfully enamel steel, it needs a layer called ground-coat (sometimes called grip-coat or base-coat) to form an interface between the steel and the enamel. The ground-coat contains adhesion agents that promote redox reactions with the iron and carbon, found in steel, at the high temperatures involved when firing the enamel. A thin coat is required and then the opaque white enamel can go on top. 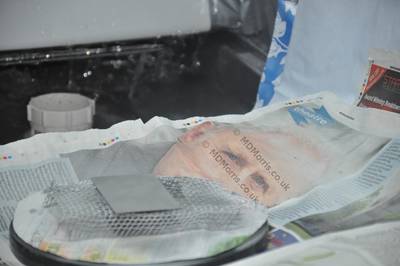 I wear a respirator, even though the enamel spray is pulled through the spray booth there are still some airborne particles that escape capture!

Besides it's fun to look and sound a bit like Darth Vader. 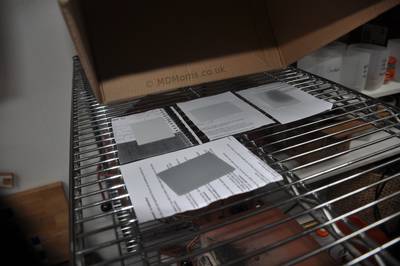 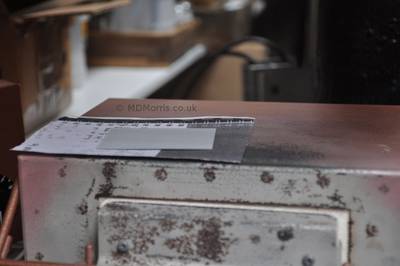 The small UHLIG kiln gets quite hot on the top as it doesn't have the same insulation as it's bigger brother.

Once both sides have been sprayed with the ground-coat the piece is ready to be fired.

With spraying on wet-process ground-coat the surface, when dry, is sufficiently strong to allow delicate handling without disturbing the surface enamel. This allowed me to do both the front and back and fire the piece only once - great for not having to prepare the metal surface again! 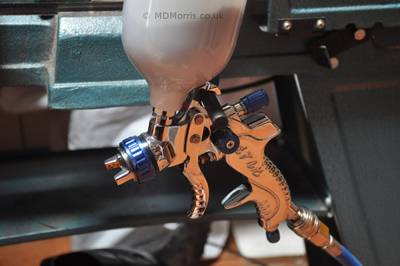 I'm using it a 4-5 bar pressure. It does clog when not used for a few minutes, so it's good to agitate to encourage the enamel mixture not to settle if possible during the not-in-use-time, or even take the enamel mixture out of the gun and blow through some water at the end of each spray session if it's not going to be used for a few minutes. It's a bit labourious but less work than having to unclog.

When the gun does becomes clogged, a tip, that may save having to take the gun apart to do a proper unclogging, is to place a finger over the nozzle and press the trigger. The finger blocks the air coming out and blows some of it back through into the enamel mixture holding chamber. It can sometimes be enough to dislodge the blockage.

Anyway, once the ground-coat is fired in I washed the pieces again but this time just with some caustic solution 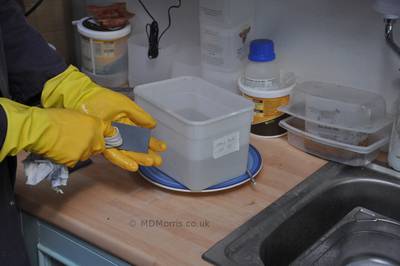 and then rinsed off with tap water. The pieces then were dried with a paper towel 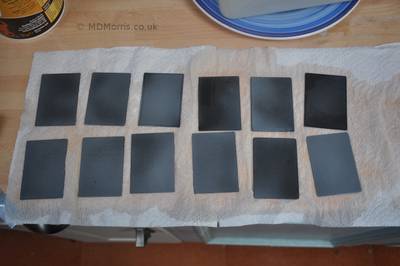 They're all ready for the opaque white.