One side of the steel is sprayed with ground-coat and dried slowly in the makeshift oven. Then I force off any remaining moisture by putting the pieces on top of the hot kiln 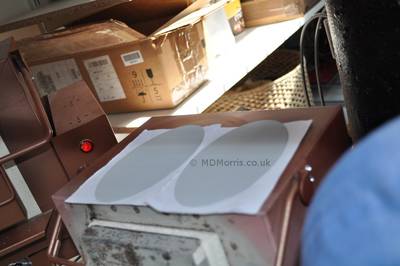 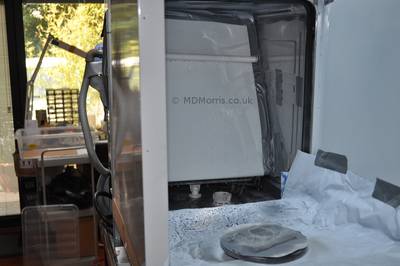 I have to be very careful when laying the piece down and picking it up from the spray booth. It has to be picked up by moving completely vertically, no sideways motion can occur otherwise this will disturb the enamel layer on the other side. I use two pallet knives to do this and slow careful motion! 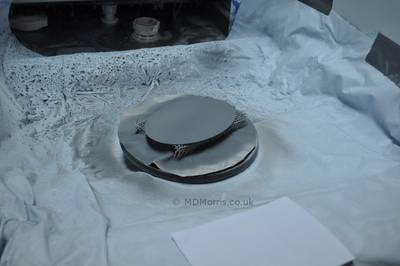 The second side of enamel is dried as before, slowly first and then on top of the kiln 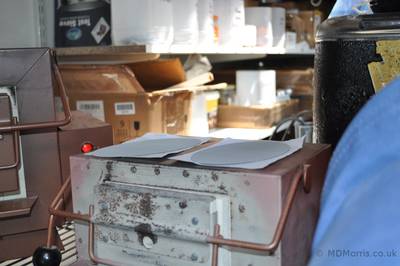 Once dried it's fired in the kiln 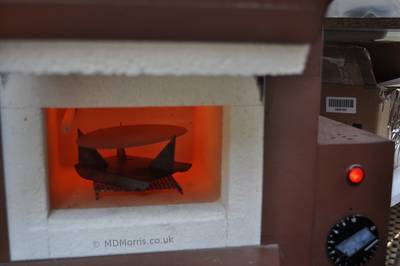 For this firing I tried to get away with an improvised support trivet consisting of a gauze and a three pronged trivet angled such that the ellipse fits in the kiln. I thought the strength of the piece, being made from steel, would be sufficient to keep it's flatness with only three prongs around the centre. However, since I'm writing this with hindsight I can tell you that it was not sufficient and some of the finished enamels were bowed,..ahh! No short cuts! It never works with enamelling. 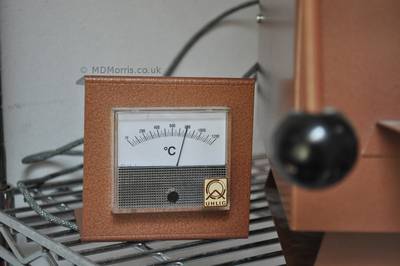 I aim to have the kiln at 800°C for the duration of the firing. This can mean starting at a higher temperature to allow for the drop in temperature for when the piece and support trivet absorb the heat.

Now what I did next was to grind flat some of the bobbly bits of ground-coat that I saw around the edges, 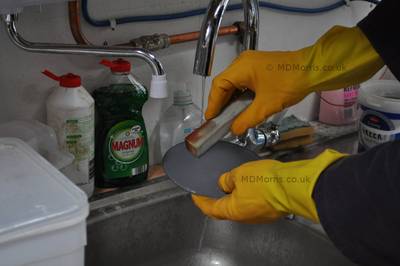 I may not have needed to do this as the protruding bobbles were only very slight. It may also be a sign that I'd put too much ground-coat on. Anyway, I washed the enamel afterwards and re-fired it.

Once the ground-coat is on then the white can be done. I'd ran out of wet-process white opaque enamel so I made up some more: 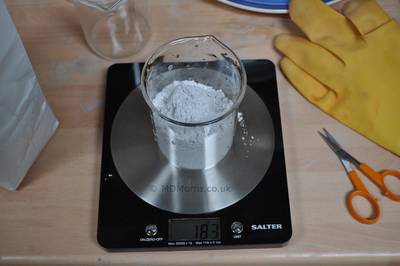 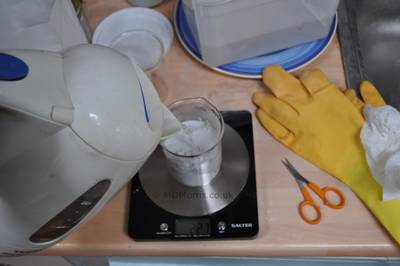 I'd previous bought the wet-process enamel pre-mixed with water, but this time I mixed it in the workshop as the cost is a little bit cheaper.

The white opaque is then sprayed in a similar way to the ground-coat, on both sides of the piece before it's fired. Here it is going into the kiln 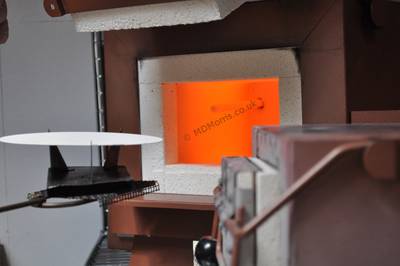 Taking the piece out of the kiln and as soon as I could take a photo without rushing about and dropping something important or something very hot it looks like this: 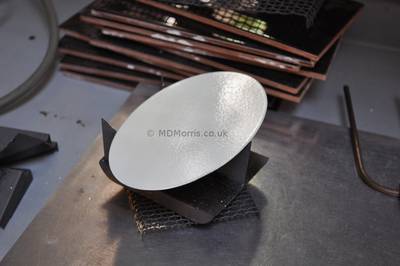 Once all the plaques have been enamelled I've got this nice set of eight: 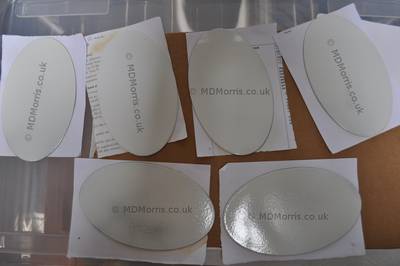 (the other two are somewhere off-camera!).

However, a few of the plaques did not have an acceptable surface quality. The density of white on a couple was insufficient and I could see the ground-coat through the white 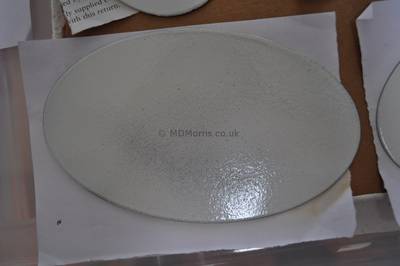 so these will need another layer of white enamel. Also one plaque had these bubble holes in the surface 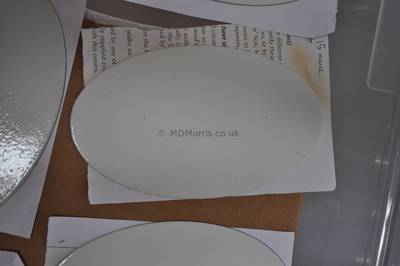 I added extra enamel but went a bit overboard 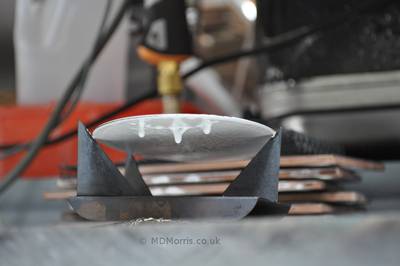 A big mistake and not pretty, although quite spectacular to have frozen drips! 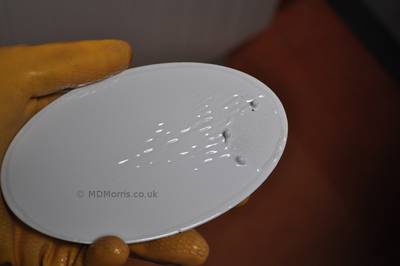 I think all the enamel went into the drip as I didn't find a big splodge in the kiln!

I ground it off 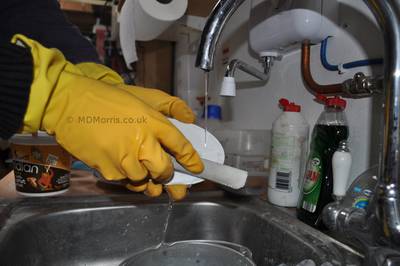 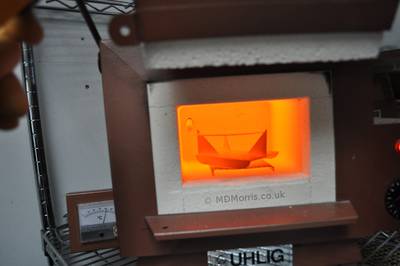 I was not too sure about the ripply surface quality that I was getting with the enamel-on steel with all the plaques. So I did another thin layer of enamel on all of the plaques, here's a pic of them drying in the oven 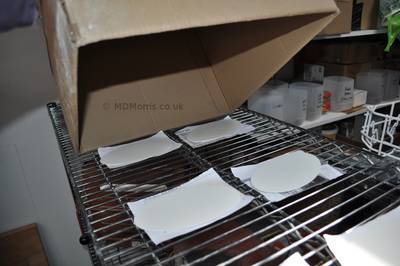 I fired these but noticed that some of the plaques had become bowed. I thought, at the time, that I could rectify it by adding more enamel on one side to balance out the forces.

A bit of material science:

The expansion of the enamel is greater than the steel at high temperatures, but as the enamelled steel cools the enamel becomes less elastic and contracts less than the steel. So for example if the steel is enamelled only on one side then the steel will experience forces that encourage it to curl away from the enamelled side. Hence I added more enamel on the concave side - it didn't work though! Probably because the enamel didn't spring back to it's flat shape in the kiln.

Another approach to flatten a piece = brute force.

Using a hot thick bottomed saucepan, once the enamelled steel is out of the kiln put it on a heavy metal surface, wait a few seconds then quash it flat. It survives! It works! I learned this from Tony, quite understandably he called it panning. 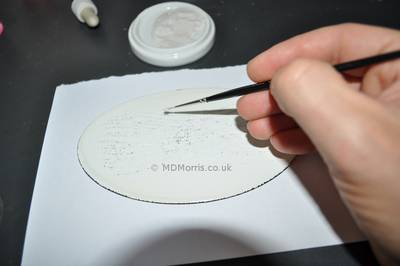 which I tried to fill with opaque white. It was marginally successful. 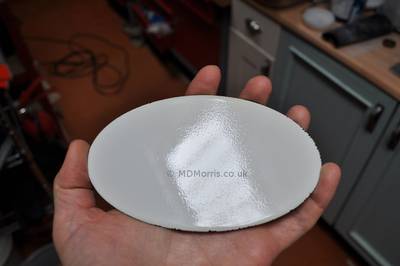 There is still the ripple effect in the surface of the enamel, which I don't get when I use wet-process spraying on copper (e.g. my enamel box) - that's why it confused me a bit. As I said I tried to get rid of the ripple by adding extra thickness of enamel but it didn't get any better so I'm assuming it's a quality of the material; so adding extra enamel was of no use and I could have missed out that step. The ripple is minor though and only noticeable when doing this reflection test so I won't worry about it too much.

In total the good plaques had about 0.8mm of enamel on both sides but without the needless extra layer I could have reduced that to about 0.6mm. 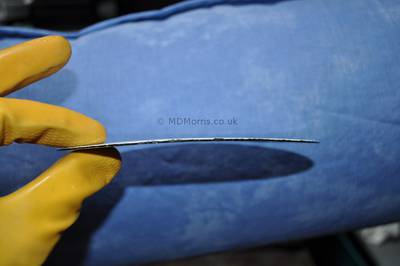 which I put down to uneven thicknesses of enamel on the two sides of the steel, and also, trying to get away with using an inappropriate trivet support!

I'd learned a lot from enamelling these ellipses, making plenty of mistakes along the way, even though I'd done the testing before-hand.